To avoid the British rain, we went to watch the documentary on Iris Apfel, the pop fashion icon.

This is the last movie from Albert Maysles before he died, and a superb piece of cinema. Iris is about the life of Iris Apfel, now 93 years old – accomplished businesswoman, compulsive fashion collector and eccentric jet-setter. 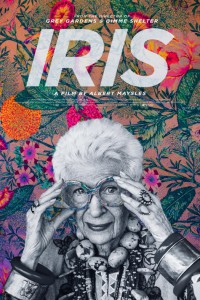 Decades ago she was told “you’re not pretty, and you’ll never be pretty. But it doesn’t matter. You have something much better. You have style.” And that’s how it started. Iris used that sentence as a mantra to imagine more exuberant clothes combinations. Today she is internationally respected for her flamboyant and disruptive sense of fashion.

On screen Iris comes across as hyperactive and excitable, with XXL owlish glasses always stuck on her nose. The film tells a wonderful story, covering all aspects of her life: her career, her love story with Carl Apfel, now 101 years old, and her company, Old World Weavers, which she founded in 1950 with her husband.

Iris is a phenomenon. She was completely unknown in the fashion industry only ten years ago. Her life changed when the Metropolitan Museum of Art’s Costume Institute faced a last minute cancellation for an upcoming exhibition. Harold Koda, curator at the Met, contacted Iris after hearing that she owned one of the richest wardrobes of costume jewellery in the United States.  He asked her to create a show from her personal collection featuring vintage and designer accessories and clothes, using her irreverent sense of style. The exhibition was a hit, and the rest as they say, is history. 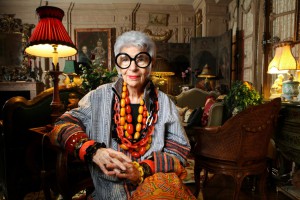 “I don’t have any rules, because I would just end up breaking them so it’s a waste of time” Iris Apfel

Iris never looked back. Ten years later, she’s an established fashion icon who launches collections one after another. She’s featured in all of the fashion magazines, with her witty character made her one of the most  sought-after opinion makers.

At the age of 93, and after two hip surgery operations, Iris is still travelling around the world and proves that anything is possible as long as she is “still vertical”. Very inspirational indeed.

You can see the trailer here: https://www.youtube.com/watch?v=Fo8jwJ_2l0c

And the documentary is still on the big screen in these locations: http://www.irismovie.co.uk/screenings/ 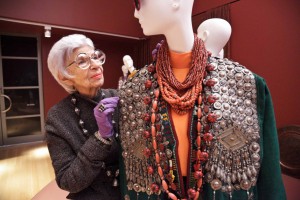