Continuing the cultural start to the year, last night Marc and Sohaib went to see Dinosaur Park, at the St. James Theatre. Here’s what they thought.

Simply put, Dinosaur Park is brilliant. It’s a retelling of Jurassic Park, with a much smaller budget, but with every bit as much imagination, and lot of love – think Be Kind Rewind. We won’t give away too much of the plot (beyond the film) but there are some surprisingly poignant moments. 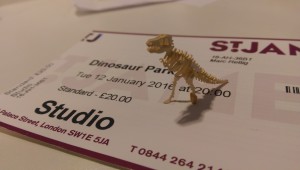 It’s safe to say you won’t feel down though – the first half in particular had us in hysterics with Mr DNA almost stealing the whole show.

Dinosaur Park is on until 23rd January before going on tour, it’s worth every penny of the £20.

Check them out here: https://www.stjamestheatre.co.uk/studio/dinosaur-park/